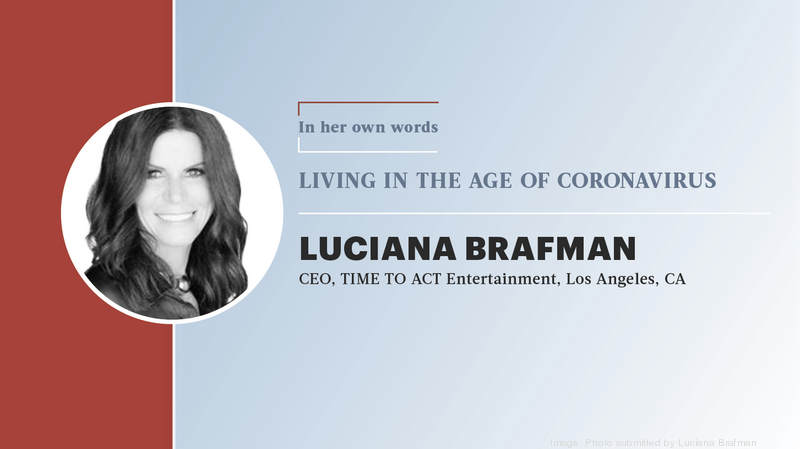 As we continue to struggle with the Delta variant of Covid-19 many women are evolving their careers and work lives. Luciana Brafman has had success in the legal and entertainment fields yet her mother’s activism in Brazil continues to resonate.

“I grew up in Rio de Janeiro, Brazil, and my mother was an actress and producer. Every weekend she’d take me to the theatre, and I often went to film sets with her and listened in on meetings she had in our house with actors. I loved theater and producing, but I assumed that you didn’t make money from it. I wanted to be financially independent, so I went to law school.

I was working as an attorney at Milbank & Tweed in New York when I started to feel disillusioned. I was doing structured financing for infrastructure projects in third world countries such as Brazil and Mexico. My parents had been activists protesting the dictatorship in Brazil when they were young, and I’d always wanted my work to have an impact. I thought the deals I was working on would help countries build their economies and create jobs, but I soon realized that was not necessarily true. A lot of times you bring a big project, like a big power plant, to a place and you wind up creating even more problems.

Around that time I met a French woman in her 80s who was a wonderful photographer. She had a great book of photos and I wanted to help her distribute it. Scheduling meetings with her was impossible because she was always out. She’d say, “If there is life outside, I’m outside taking pictures of it.”

I was in my office in a skyscraper with windows that didn’t even open. I thought: what am I doing here?

While I was still an attorney I had an idea for a play. I collaborated with a writer and we produced the play at La Mamma, an off-Broadway theater. Through that I met a prominent producer, Linda Yellen who asked if I’d like to help produce a movie she was directing called The Simian Line. I did everything from using my legal background to help negotiate actors’ contracts with their agents to arranging craft service.

Montel Williams, who had a hit talk show at the time, was one of the movie’s financiers and he asked me to produce his first movie. I had never produced anything myself but I agreed. I remember the first time I saw the plaque he put on my office door: film producer. It was surreal.

When that wrapped up I went back to Brazil and opened a production company. I’d been in New York for about ten years and was ready for a change. The line producer I’d hired on Montel’s film called one day. He was working on “Survivor” and he wanted me to help produce the season they’d be filming in the Amazon jungle. I didn’t watch TV and had never heard of the show. He sent me a VHS tape. People were eating crickets and doing all these crazy things. It wasn’t for me so at first I said no, but he convinced me.

It was a huge production. But my attitude about work is pretty simple. Managing a house or managing a country isn’t different, it just changes the magnitude of things. For me, it’s all about having the right team. If you hire the right people and show them you have a vision, you can do anything.

For almost a year I lived in the Amazon rainforest. It was an amazing experience. I was surprised that I had fun, and when Mark Burnett asked me to keep working with him, I moved to Los Angeles. I did a few more seasons of “Survivor” and spent six years with “The Apprentice.” I also produced Oprah Winfrey’s “The Big Give” for ABC. When that ended I decided I wasn’t going to produce again unless it was my own project.

I had a baby boy and was inspired by watching him to create an interactive children’s show which I sold to Hit Entertainment, home of Bob the Builder and Thomas the Train. Afterwards, I took time off to focus on taking care of my son. That’s when I really became passionate about children’s entertainment. I saw firsthand that the most successful projects encouraged learning, but entertainment always had to come first. Kids won’t pay attention if they’re not having fun.

As my son got older, he and his friends began communicating through gaming. I discovered that the whole idea of entertainment and learning was lost in the gaming world. And I worried that kids were stuck in their rooms playing games and not aware of what is going on in the world.

We need to teach them. They are the future, and if we don’t give them the tools to create a better world then what is going to happen? This is where I learned the value of edutainment and the impact it can have on the younger generations.

That was my inspiration to start TIME TO ACT Entertainment, a content company that raises awareness, galvanizes social responsibility and inspires activism. The goal of my company is to create a link between the virtual world and the real world. Every project we do will involve organizations that promote change in the world.

One of my first projects is a mobile game called EARTHLING 22, an environmental adventure mobile game that aims to teach kids about climate change. TIME TO ACT will donate a percentage of every in-game purchase to organizations including One Planted Tree, Oceans Conservancy and LA Urban Farms. Children playing the game will choose which organization they want to support, both empowering them and also giving them the ability to track how the donations from their purchases are being used.

I developed the game before the pandemic, but technology and the gaming world has evolved so much during this time that I decided to go back and redesign the game. Also, seeing all of the recent news on climate change and more frequent extreme weather events, the need for this type of content is dire, so I am working to raise capital to expand the company’s offerings.

I feel our society is in a major transition. I hope people are taking this time to revise how they are living, their relationship with each other and with the planet. With any transition we have to destroy a lot of things so new ones can be built. We have the opportunity now to teach our kids about the issues that matter, and give them the skills they will need to create a better world both empowering them and instilling social responsibility.”

This is a time for virtual community and sharing. If you would like to contribute to this ongoing narrative on the pandemic’s impact on women’s lives, please send an e-mail to Esherberg@bizwomen.com.